Who builds your SMSF Deeds? A law firm or a non-qualified supplier

A modern Australian Family Discretionary Trust has 100,000 of beneficiaries. They have no rights so you make the class of beneficiaries as wide as you can. It is not just family members.

A beneficiary in your Family Trust falls into two groups:

1. resident of Australia for tax purposes (residents); or

Australia taxes residents on all income. This includes income and capital gains from other countries. Residents are taxed on world income.

In contrast, non-residents are only taxed by Australia on Australian income and capital gain.

It sounds like a good idea if you are earning money from overseas, to be a non-resident.

Am I a ‘resident’ of Australia?

(a) a person, other than a company, who resides in Australia and includes a person:

(i) whose domicile is in Australia, unless the Commissioner is satisfied that the person’s permanent place of abode in outside of Australia;

(ii) who has actually been in Australia, continuously or intermittently, during more than one-half of the year of income, unless the Commissioner is satisfied that the person’s usual place of abode is outside Australia and that the person does not intend to take up residence in Australia; or

(B) an eligible employee for the purposes of the Superannuation Act 1976; or

You can see you need to sell your family home, furniture and car; grab your children and spouse and leave the country to set up a new home. It is a hard test to get around.

You are a resident if:

1. you are a ‘resident’ under the normal meaning of that word; or

2. you are in Australia for 183 or more days over the last year; or

3. ‘domiciled’ in Australia with no other ‘usual place of abode’ outside of Australia; or

4. you are an employee under some Australian government superannuation schemes.

If you are not a ‘Resident’ then you are a non-resident for Australian tax purposes.

Mr Harding was an aircraft engineer initially employed with BAE Systems. Born in Australia in 1965, he left Australia at a relatively young age and married his first wife, a British national, in 1990 in the United Kingdom. Harding’s employment with BAE Systems led him and his wife to move to Saudi Arabia later that same year. 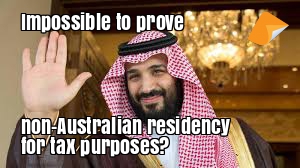 The couple continued to live in the Middle East until the political and geopolitical situation worsened following 11 September 2001. The taxpayer’s wife and children returned to the United Kingdom for two years then came back to the Middle East in 2003. At that time it was decided the family would relocate to Australia. In early 2004 the couple built a house at Warana in Queensland, which Harding’s wife and children moved into. Mr Harding remained in Saudi Arabia until May 2006, when he ceased employment with BAE Systems. He then moved into the family home at Warana. He began to work as an operations manager in Australia for considerably less money.

In early 2009 Mr Harding received an offer of employment with a UK company to work in Saudi Arabia for a much higher salary. Mr Harding and his wife agreed that he would accept the position and relocate permanently to the Middle East. She and their third child would join him at the end of 2011. This is once their second child had finished his secondary education. Mr Harding sold all of his significant personal possessions in Australia, including his boat and car. He took all of his remaining personal belongings with him to the Middle East.

Although Harding resumed working in Saudi Arabia he chose to live in nearby Bahrain. Initially, he leased a two-bedroom unit to accommodate his family when they visited. During a visit in July 2009, Harding and his wife began looking for more appropriate accommodation and schools and pre-enrolled their youngest son in the British School in Bahrain. The taxpayer also made regular visits to Australia. In the relevant income year, the taxpayer returned to Australia four times for a total of 91 days, staying each time with his family in the Warana property. On his outgoing and incoming passenger cards, he indicated he was an Australian resident.

The couple’s marriage broke down in 2011 and Harding moved into a one-bedroom unit in the same complex in Bahrain. The following year he moved back into a two-bedroom unit in the complex to live with a new partner, Ms G. However, his relationship with Ms G ended in 2014 when he committed to a new job in Oman due to Ms G’s reluctance to relocate to Oman with her two young daughters.

Was Mr Harding a ‘resident’?

Was Mr Harding a resident of Australia for the purposes of s 6(1) Income Tax Assessment Act 1936 for the 2010/11 income year? The ATO said he was a resident under both the ordinary concepts test and the domicile test. It argued that his overseas income was, therefore, assessable.

What the Court decided

1. In the determination of where a person resided their subjective intention had a role to play and could be significant. However, it was neither sufficient nor vital or decisive. Each case must is determined on its own circumstances. In this case, the taxpayer’s circumstances were unusual in that he was acutely focused on his employment and placed his personal work satisfaction ahead of his personal relationships. The ATO’s submission that Harding’s departure was conditional upon his family joining him in Bahrain was to be rejected. The objective facts surrounding Harding’s circumstances supported his oral evidence that in 2009 he left Australia for the Middle East with the intention of staying there indefinitely. This was with no intention to return to Australia and to continue to treat it as “home”. His absence from Australia and his formed intention not to return was sufficient to terminate his residency to the extent determined by the ordinary concepts test of residency.

2. The expression “place of abode” in subpara (a)(i) of the definition of resident in s 6(1) had its natural or ordinary meaning such that it referred to a house or place of accommodation or a house or place to live. There seemed little to warrant the conclusion that it was intended to have the expanded meaning contended for by Mr Harding, which would almost inevitably deprive the domicile test of all operation. Ascertaining the meaning of the expression “permanent place of abode” required a more nuanced approach. In the context in which it was used it necessarily referred to the existence of a person’s enduring habitation in their accommodation, but taking into account that the person was not intending to live there permanently or even indefinitely.

3. In Mr Harding’s circumstances, the absence of substantial domestic acquisitions indicated that he was not intending his stay in the Bahrain units to be of a significant duration or other than temporary, as did the fact that he was not required to enter into utility agreements with third parties, and did not appear to use the complex as an address for correspondence. Nor did the couple envisage the complex to be the family home when the family relocated. It followed that, in the relevant income year, the taxpayer did not establish a permanent place of abode in Bahrain. By its character, the apartment complex was a type of premises used for temporary or transitory accommodation and Harding used it as such. He did not have a permanent place of abode in the sense required under the domicile test and therefore was a “resident of Australia” in the 2010/11 income year.

Why the Court was wrong:

The Court failed to understand that:

1. people live ‘permanently’ in these fully furnished apartments; and

2. after a few red wines, on the plane, you don’t really give much thought to your Australian Departure slip. Perhaps you should write on it ‘refused to answer on the advice of my solicitor Dr Brett Davies’.

The Full Federal Court found that Mr Harding had a permanent place of abode in Bahrain. This was the case even though he lived in temporary accommodation in Bahrain. Therefore, he was not a resident of Australia: Harding v FCT [2019] FCAFC 29 (Full Federal Court, Logan, Davies and Steward JJ, 22 February 2019). He, therefore, did not have to pay tax in Australia.

Under the definition of “resident” in section 6 Income Tax Assessment Act 1936, a person is a resident of Australia if their domicile is in Australia. This is unless the ATO is satisfied that the person has a permanent place of abode outside Australia. The issue, in this case, was whether Mr Harding had a permanent place of abode in Bahrain in the 2011 income year. If not, he is a resident of Australia on the basis of his domicile. 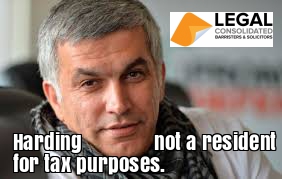 As stated above, at first instance (in Harding v FCT [2018] FCA 837) Derrington J decided that Mr Harding did not have a permanent place of abode outside Australia. This was because his accommodation in Bahrain was temporary. Accordingly, he was a resident of Australia.

Their Honours said that the rationale of the exception to the test of residency based on domicile is that a person domiciled in Australia is not to be made subject to federal income tax when they have abandoned in a permanent way their Australian residence. Drawing a distinction between “someone who buys a singular flat in a foreign country as against someone who lives in a series of temporary flats in that same country does not promote the rationale of the exception”.

The evidence, in this case, showed that Harding had abandoned Australia as a place to live and work and that, in the 2011 income year, his permanent place of abode was in Bahrain. Accordingly, he was not a resident of Australia.

Davies and Steward JJ also rejected the ATO’s Notice of Contention that he resided in Australia in the 2011 income year according to ordinary concepts of residency. The quality and nature of the taxpayer’s objective connections with Australia, such as his Australian citizenship, his visits to see his family, supporting his family financially, the maintenance of a bank account, the maintenance of Australian private health insurance and the purchase of an investment property, were insufficient to overcome the significance of his intention to leave indefinitely.

1. Division 855 and the limits on the taxation of non-resident capital gains

What the Accountant, lawyer and adviser need to consider

Your professional adviser needs to be aware of the Australian tax position. They also need to know the foreign consequences of distributing income and gains to non-resident beneficiaries.

These Annual Family Trust Distribution Minutes will help you and your advisers.

For help building the Minutes please telephone us.